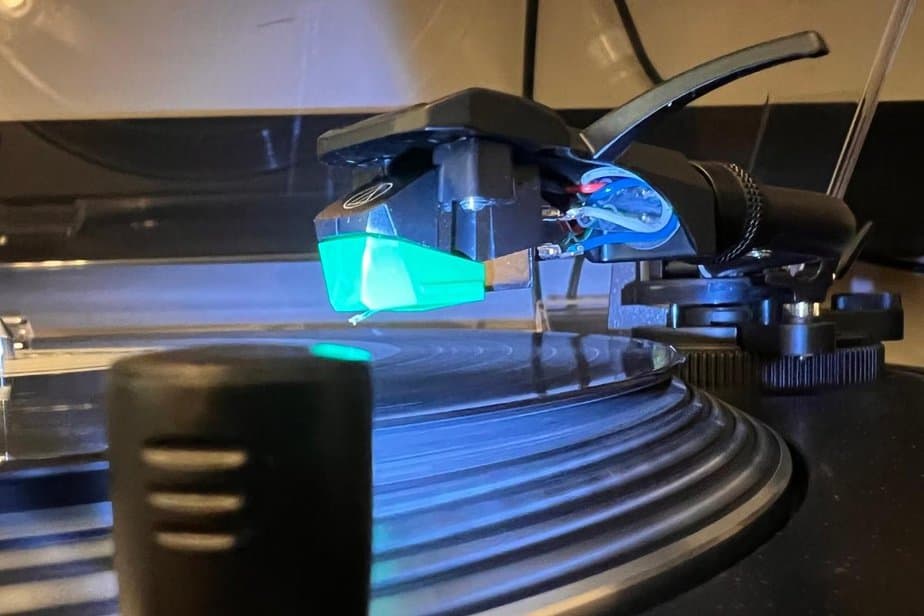 Nowadays, you can listen to a song digitally and mentally wear yourself out through repetition, but as a vinyl record enthusiast, you’re worried about listening to your records too much and literally wearing them out. I’ll tell you if it’s possible ahead.

Vinyl records can indeed wear out by playing them on your record player frequently enough. The stylus degrades the record’s grooves little by little so that over the years, the quality of the record would be lower than when you originally bought it.

In today’s article, I’ll explain whether vinyl records can wear out, how long it would take for it to happen, and what the sound differences are between a fresh record and a worn-out record.

Can a Vinyl Record Wear Out?

Vinyl records are made of polyvinyl chloride or PVC. The grooves throughout the record are sound waves that, when played on a turntable or record player, produce sound, namely music.

It’s not so much the quality of the PVC you have to worry about when it comes to vinyl records wearing out. Rather, it’s those grooves becoming deeper and deeper.

You see, when you play a record, you take the stylus or needle, place it on the record, and the vinyl spins and spins. This creates increasingly deeper grooves that will eventually cause your record to wear out.

The degradation is gradual, but it does happen. I’ll talk more in the next section about how long it takes for a record to worsen, so be sure to check it out.

One of the fastest ways to wear out your vinyl records is by playing them on a low-quality record player.

As I talked about in my article on record players versus turntables, cheap record players have equally cheap components. Those include the stylus or needle.

Misusing your turntable or record player is another way to kill records fast.

For example, if the stylus needs to be replaced but you keep using yours anyway, then bad things will happen.

The old stylus can deepen the grooves past the point of no return and widen them as well to cause distortions.

If you don’t have the anti-stake settings correctly calibrated for your turntable, then there’d be more force on the record when playing it. You’d still have to play a record a lot to damage it, but the likelihood is indeed higher.

Improper tracking force settings or an imbalanced tonearm can also increase the amount of weight that’s applied to the vinyl when spinning it.

How Long Does It Take for a Record to Degrade?

Now that you know that your vinyl records breakdown slowly every time you listen to them, the question is, how long does it take?

That’s actually a tough question to answer because there are a few factors you need to consider.

Technically a record degrades every time it’s played. As far as a record degrading enough for you to notice, this may take a couple years or a few thousand spins.

Vinyl records themselves can last anywhere from 100 to 1,000 years assuming you preserve yours and care for them well.

As I said before though, it’s less about the vinyl itself and more about the grooves and how fast they wear away.

You’ll recall from the last section that it’s a slow process. The stylus isn’t digging into the vinyl any deeper than it has to if you’re using a good-quality turntable or record player.

The PVC does still wear away little by little, but probably not to a point where you’d notice it.

You’re likely listening to a collection of records when you plug in your turntable because no one wants to hear the same thing over and over.

By spinning different records, you’re spreading out the usage and thus the degradation of each one.

It’s sort of like buying two or three pairs of shoes when you go shoe shopping. You won’t wear the same pair of shoes every day, so all three pairs end up lasting longer than if you only owned one pair.

Other factors come into play too, of course, such as the age of the vinyl and whether you were the first owner of the record.

If you have a very old record that’s been around for generations (and isn’t a reprint), then you can assume it’s been around the block as far as being played goes.

A record like this is going to be much more worn down than a newer record from the past 10 years that you’ve played maybe 12 times.

Perhaps you do have one of those aforementioned very old records, or maybe your record is newer, but you think you played it literally to death.

Here are some sounds to keep an ear out for.

If your record was produced before or during the 1970s and it’s badly damaged, then you might hear a hissing sound every time you play those classic tunes.

The volume of the hissing varies, but whether it’s barely there and lingering in the background or it’s more overt, hissing is an audiophile’s worst nightmare.

You’ll be distracted when you listen, and the clarity of the music is tarnished.

Another sound you could hear when a record is worn out is a crackling sound. It’s almost like sitting by a fireplace while the fire is roaring, but there is no fireplace and no wood.

Instead, this is indicative that there’s something wrong with your record.

Your favorite record is worn out when you hear scratching sounds playing in the background of every song.

Record enthusiasts also note that sometimes you can visually determine if a record is worn. Once a proud black color, the record will now look grayish. Its sheen can disappear as well.

If you own a record that’s white, pink, or any other color besides the typical black, then these visual imperfections will be harder to decipher.

How to Prevent Your Vinyl Records from Degrading

It’s heartbreaking when your favorite vinyl record wears out, especially if you have a limited-edition, out-of-print vinyl that you would have to spend quite a pretty penny to replace (provided you can replace it at all!).

I’ve mentioned throughout this article that proper vinyl care is key in preserving your collection.

To wrap up then, I want to share my top 6 tips for taking good care of your records.

Don’t Leave Them in the Record Player

Records come in a sleeve for a reason. That’s where you’re supposed to keep them when you’re not listening to them.

Leaving the vinyl in your record player or turntable is not advisable. Even though turntables have dust covers, if the cover is slightly ajar, dust can accumulate within the grooves of the vinyl.

The next time you go to play that beloved record of yours, it will sound quite funky, and not in a good way!

It takes an extra minute to pop your record out of the turntable or record player, insert it in its sleeve, and store it in a vinyl rack or on a shelf.

For the longevity of your record collection, take that time every time.

Store Them in a Cool Place

Where you keep your vinyl records matters.

You ideally want them in a cool space that doesn’t experience temperature extremes.

Heat is a quick and ruthless vinyl killer, leading to damage such as warping that’s unfixable once it occurs.

The cold is not much friendlier to vinyl. If the temperatures drop below 32 degrees Fahrenheit, your record could become brittle and thus easily snappable.

It’s not always feasible to keep records in your living room or entertainment room. If you must store your collection in a basement, attic, or garage, please ensure the room has some degree of temperature control.

Even if your vinyl records stay in their cases most of the time, each time you pull one out of your extensive collection to listen to, it’s going to be exposed to the air and thus can get dirty.

Take the vinyl out of its sleeve. With a clean, dry microfiber cloth, wipe over the vinyl to remove surface dust and debris.

You want to be extremely gentle as you go about this. The less pressure you apply, the better.

If you’re too heavy-handed, you can end up worsening the problem by forcing dust deeper into the grooves of the record.

After you wipe down your vinyl, use distilled water to moisten the microfiber cloth.

Rub the cloth over the vinyl circularly, following the grooves. Don’t get the center label wet!

Take your trusty microfiber cloth, dip it into the bowl, and rub circularly again.

Finally, to wrap up, use a dry microfiber cloth to blot up all the water.

Play Records Only on a High-Quality Turntable or Record Player

If you’ve spent less than $100 on your turntable or record player and you didn’t find it on sale, then I wouldn’t put your favorite records in there.

To recount what I talked about earlier, a lower-cost record player does not have the caliber of parts to preserve your records each time you play them.

The rate of degradation of the vinyl is likely to be more.

Invest in a good turntable or record player. You can rest easy that your records will incur less damage, and the sound quality is usually better to boot!

No parts of a turntable or record player last forever.

Even if yours is a high-quality, high-cost music-playing machine, the time will inevitably come when you have to change out some parts.

Mostly, that’s the stylus, which lasts about 1,000 hours.

Make it a habit to replace yours that frequently before the stylus can begin digging deeper grooves into your records.

Get a Digital Copy and Play the Record Seldomly

As much as you might love an album, spinning the same record over and over is a proven way to wear it out.

To preserve the vinyl, try enjoying the same album in other ways.

You might still favor the CD in today’s day and age. CDs last for upwards of 200 years and don’t have scratchable grooves. That said, you can still scratch a CD by misusing it.

Listening to music digitally is a great way to ensure the clarity and quality of your favorite music never degrade no matter how many times you repeat the same song!