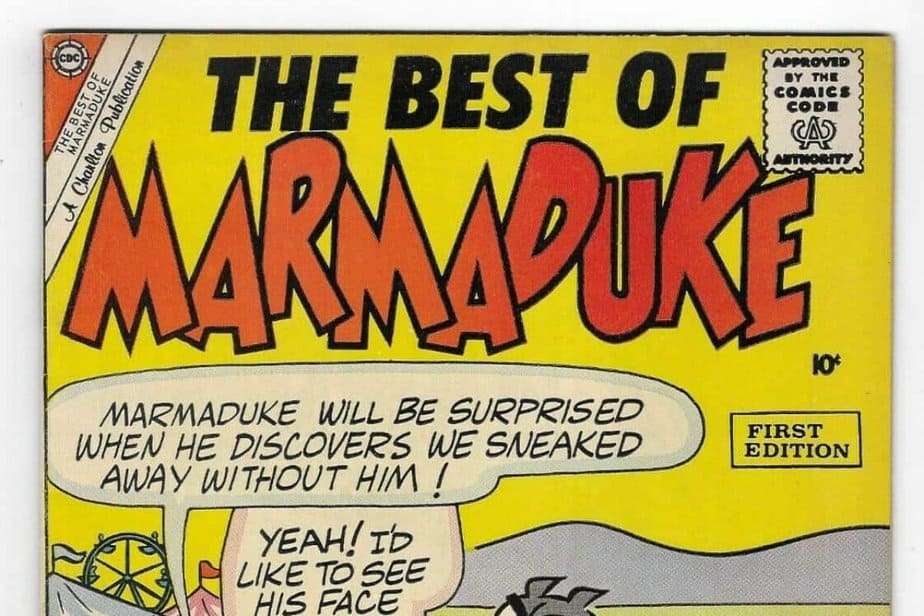 If you have some Marmaduke comic books lying around in pretty good condition, you may be wondering if they’re worth anything. I’ll tell you in today’s article!

In today’s article, I’ll examine the history of Marmaduke and the value of the comics, so keep reading!

What Are Marmaduke Comics?

If you by chance have never heard of Marmaduke, the comic stars the eponymously-named Great Dane as well as the Winslow family.

Marmaduke is a 40-inch dog with a lovable personality. However, he’s always getting into mischief.

The rest of the Winslow family includes parents Debbie and Phil, children Brian (aka Billy), Barbara (aka Barbie), and Debbie, as well as a cat called King Tut.

The Winslows’ neighbors, Mr. and Mrs. Snyder, are also featured in some comics.

Brad Anderson, an American cartoonist, created the Marmaduke comics. He sold them to the John F. Dille Co., later to be called the National Newspaper Syndicate, in 1954.

Between 1955 and 1962, Anderson partnered with Phil Leeming to produce Marmaduke comics. Then, from 1963 to 1969, he worked with Dorothy Leeming.

Anderson’s own son Paul even worked on the Marmaduke comics from 2004 onward with his dad.

New Marmaduke comics were faithfully printed in newspapers until 2015, which is when Anderson died. He worked on the comics right up until his death.

They’re still printed in syndication so new generations of readers can appreciate Marmaduke the dog.

While we’ll never know what Anderson planned for the ending of Marmaduke to be (if he even had one in mind), we have decades and decades of comics to look back on, and that’s incredible!

How Much Money Does a Marmaduke Comic Sell For?

None of the Marmaduke newspaper printings are valued, but a handful of publications of Marmaduke comics are.

In 1973, Scholastic published yet another Marmaduke comic called More Marmaduke.

Then, Scholastic again published Marmaduke content in 1985. This time, it was a collection of Sunday comics, known as Ever Lovin’ Marmaduke.

The last is a 1985 comic called Marmaduke: Super Dog that was published by Ravette Books.

Let’s evaluate the prices of each Marmaduke now.

The Best of Marmaduke features 36 pages of original Brad Anderson art. Its cover price was 10 cents according to My Comic Shop.com.

This comic book, despite its age, is not very high-valued. Comic Book Realm, a comic value aggregate, says the current value of the comic is $40.

In over 60 years, the value of the comic has only risen by approximately $39.9.

The 1969 comic published by Scholastic Book Services simply entitled Marmaduke was the first of many titles the publisher would release featuring the beloved Great Dane.

The book features Anderson’s art when he was teaming with Phil Leeming.

The cover price of the comic was $0.45. Today, it’s worth $2, says Comic Book Realm. Its value has barely gone up in many decades.

The 1973 publication of more of the latest (at the time) Marmaduke comics, appropriately called More Marmaduke, was another in the Scholastic collection.

I couldn’t find any resale info on the comic through Comic Book Realm (it’s not listed on there), but between Etsy and eBay, this comic sells for as low as $5 and as high as $23.

The last Scholastic publication of Marmaduke comics (that I was able to find, anyway) was called Ever Lovin’ Marmaduke.

This collection of comics was published later in Marmaduke’s run.

It was even harder to find pricing information on this title, but its resale value appears to be around $40. Keep in mind that that’s seller pricing on sites like eBay and can vary.

Marmaduke: Super Dog was not published by Scholastic, but rather, Ravette Books. The softcover paperback is valued at $10 according to Comic Book Realm.

If you’ve faithfully held onto some Marmaduke publications for years hoping the day would eventually come when you could sell them for a good price, I’m sure that reading the last section disappointed you.

Why aren’t any Marmaduke comics worth thousands of dollars?

While it’s impossible to say for certain, here are some factors that may be at play.

Most Publications Were in the Newspaper

You have to remember that Marmaduke comics were primarily printed in newspapers. Back in the 1950s when Brad Anderson was originally writing Marmaduke, a newspaper sold for five cents.

Newspapers aren’t priced that low anymore, but they’re still not what most people would consider expensive.

This does set the precedent that newspaper comics would be worth little as well.

Let’s say that you predicted that Marmaduke comics could be worth something someday. You decide to cut them out and store them somewhere.

The comics won’t last forever due to their medium.

Through the 1850s, paper was made at least partially of rag. That composition allowed old papers to last for a long time, seemingly centuries.

Newspaper though doesn’t have nearly as long of a lifespan since it doesn’t contain rag.

To make a newspaper, wood would undergo a grinding process to produce particles with the consistency of sawdust. Those fibers are boiled to make them into sheets.

The remaining lignin in the wood begins to break down the cellulose. This is how newspapers become yellowed.

Eventually, the paper will turn so brittle that it can easily disintegrate.

All said, the lifespan of even a well-preserved newspaper is only around 50 years.

Many of the Marmaduke comics may be lost to time and thus couldn’t be resold.

When it comes to factors that determine an item’s rarity, scarcity is definitely one of them.

If you can buy 100 apples at a cart, you’re in no rush to shop. If only five apples are available, then suddenly you’re thinking about how much you need apples.

Marmaduke ran from the 1950s through the mid-2010s. It was around for 61 years, and with Anderson’s son Paul Anderson having drawn Marmaduke at one time, Marmaduke comics theoretically could continue.

The paperback comic compilations are few and far between, but the newspaper publications are so plentiful that they might be less valuable due to their sheer number.

Many people remember growing up reading Marmaduke comics no matter how old you are. That said, compared to canine characters such as Snoopy or Scooby-Doo, Marmaduke is a lot less well-known.

Marmaduke did get the animation treatment courtesy of Ruby-Spears in 1980, but not his own show.

The animated segments were featured in Heathcliff, another newspaper comic that transitioned more successfully to the big screen.

The dog has had two films as well, a 2010 live-action movie called Marmaduke starring Owen Wilson and a 2022 animated film by the same name with Pete Davidson as the beloved dog. Neither movie did particularly well.

Now, I’m not trying to knock on Marmaduke at all. The dog is a beloved cartoon, but since he’s not as beloved as some other cartoon canines, Marmaduke comics aren’t worth too much.

That’s okay though. At the end of the day, what matters more than what a comic is worth is how much it means to you. If you’re a Marmaduke fan, then keep your comics and reread them with pride!