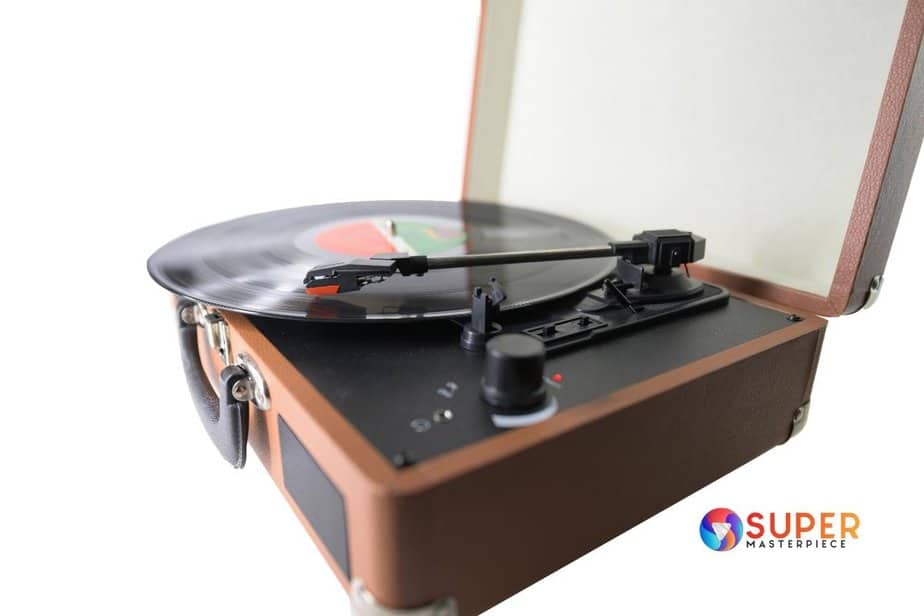 If you’re wondering whether portable record player brands like Victrola and Crosley are safe, I’ll tell you in this article, so make sure you keep reading. There’s lots of useful info to come.

Will a Portable Record Player Ruin a Record?

Turntables and record players don’t exactly make music portable, which is why most people have stepped into the 21st century with digital music on their phones.

Portable record players are really popular right now. They’re not as streamlined as a smartphone but still allow for music listening in more places than one’s home. Is the price you pay for convenience worth potentially ruining your records?

Allow me to explain why.

In 2002, the vinyl revival began, and it’s still ongoing into the 2020s. Today’s era of music listeners who grew up on the portable Walkman and mp3 player have naturally gravitated towards suitcase record players since they can go just about anywhere.

As suitcase or portable record players have become more popular, the market’s become saturated with them. It seemed, for a while at least, that everyone wanted to get involved in this trend.

This means that when it comes to portable record players, more so than standard record players or turntables, there are a lot more very cheap products out there.

Since a portable record player might be today’s modern music listener’s first turntable, they don’t always know that what they’re paying is too low.

Then they get their suitcase record player home, spin a new record a few times on it, and the record scratches.

This can cause a new vinyl listener to abandon the entire format. After all, although portable record players are a dime a dozen, vinyl records can cost upwards of $30 or $40.

That’s a lot more money than buying a record digitally or paying for a streaming music subscription service.

Now, please don’t get me wrong here. This issue is not exclusive to portable record players at all.

Even stationary record players and turntables can suffer the same malady. When the record player doesn’t cost a lot of money, it gets low-quality parts.

This is most damning when it comes to the stylus. A cheap stylus can easily scratch, drag, and damage your records.

That said, since the portable record player market is a lot more flooded than the markets for stationary record players and turntables, cheap products and parts are unfortunately a lot likelier, as is damage.

For the next three sections, I want to investigate specific manufacturers that make portable record players. This way, if you’re considering one of these brands, you can shop carefully.

Victrola is one of the oldest producers of turntables and record players, having been founded in 1906. Their name is also instantly recognizable if you’re anything but a very casual music listener.

With such a long-lasting legacy, Victrola has clearly done something right. Its turntables and record players are top-notch, but what about the portable or suitcase record players?

Most of Victrola’s portable record players are available for under $100. Even the more expensive models are only $200.

That’s about right for a portable turntable, but it should raise some red flags. After all, when buying record players at that price point, you usually don’t get the highest-quality product.

Victrola’s faced some criticism from its customers for the quality of its record player styluses. I don’t think this should be very surprising.

You know from the last section that if a stylus is low-quality, the risk of your record getting scratched, especially through prolonged use, increases.

Thus, I would say that if you really want to own a Victrola, maybe stay away from the portable record players and buy a turntable or stationary record player instead.

If you really had your heart set on a suitcase record player from this manufacturer, then at least consider replacing the stylus. This will mean spending more money, but you can’t put a price on peace of mind!

Perhaps even better-known than Victrola when it comes to record players is Crosley.

The full name is Crosley Radio, a Kentucky-based brand that was established in the 1950s.

Also as was the case with Victrola, Crosley’s product costs are a lot lower than what you’d expect. For example, you can shop many turntable styles for under $100.

You know what I’m going to say here. When a record player or turntable is sold at such a low price, that means sacrificing quality construction. This comes through especially loud and clear when it comes to the stylus.

Crosley does produce a diamond stylus replacement for some of its turntables and record players. Some users say the replacement stylus improves the quality of the listening experience and others say it’s just okay.

I would not recommend playing a vinyl record on your Crosley with the original stylus for very long!

I also want to talk about ION Audio, which does not have the same degree of name recognition as Crosley or Victrola.

ION is an even newer kid on the block than Crosley, having been founded in 2002 as a consumer electronics brand. They only produce turntables as of this writing.

If you browse around on ION’s site, you won’t see a price tag anywhere. That might make you think that an ION turntable is going to be very costly, but that’s not usually the case.

These turntables are priced about the same as a turntable from Crosley or Victrola. You’re spending maybe $125 but usually under $100.

The online audiophile communities I belong to are not shy about sharing with me how ION turntables have ruined vinyl records of theirs or someone they know. It once again comes down to cheap parts.

I would again caution you to consider replacing the stylus that comes with your ION turntable if you really want to use one of these record players.

How Do I Know If My Portable Record Player Will Ruin My Record? What to Look Out For

Reading through this article might have made you nervous about buying any record player lest it scratch your new vinyl collection.

You don’t have to miss out on the beauty of vinyl. You just have to shop smart. Here are some indicators that will tell you whether you’ve found a quality record player!

If you see a portable record player for $30, then you can’t possibly expect that record player to take very good care of your vinyl collection.

You want a stylus that’s made of either sapphire or diamond. These hard materials will ensure your stylus can handle some wear and tear without wrecking your records.

Good stylus quality is hard to come by in the realm of portable record players, but it does exist.

And if you really can’t find a suitcase record player with a stylus that meets your standards, then be ready to replace the stylus with a better one.

When in Doubt, Read the Reviews

The great thing about smartphones is you can look up the portable record player you’re interested in on Amazon or even the manufacturer’s website and quickly comb through the reviews.

Customer reviews don’t lie. If enough people have an issue with a record player, you’re going to see that reflected in the record player’s low star rating.

If they don’t, then I would advise you not to buy that record player!