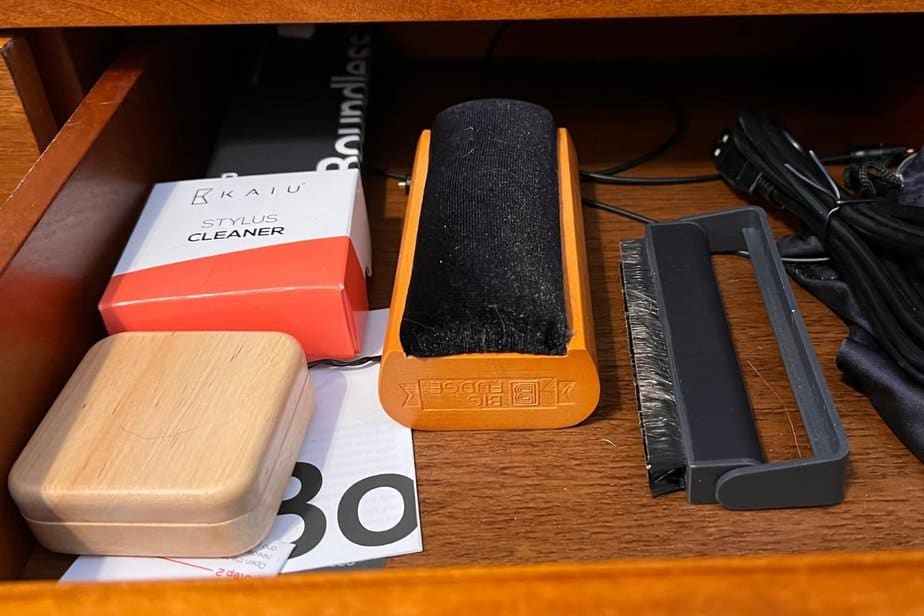 You bought your record player new, which is why you find it strange that it sounds very warped, almost staticy, or muffled. I’ll tell you what’s going on here!

In today’s guide, I’ll walk you through each of these sound issues that can mar your listening experience and discuss how to diagnose and fix them. Whether your record player sounds like hissing static or it’s very muffled, you can improve its sound quality, so keep reading!

How to Deal With All Your Record Player Sound Woes

Let’s begin by addressing the terrible sound of a warped record.

If you don’t know what I mean when I say a record is warped, it will have more than crackles and clacking (although you will hear that too).

The pitch of the record will be all out of tune. The RPM can increase or decrease sporadically, which really ruins your listening experience.

I’ve had warped records that sounded made the singer sound like he was singing under water. It also reminded me of a really low res mp3 recording that sounded horrible.

So what causes your record player to sound warped? It could be the record itself, especially if it’s brand-spankin’-new out of the shrink wrap.

Unfortunately, due to periods of poor quality control at the pressing plant, plenty of records have been known to leave the plant looking bent and warped.

It’s also not uncommon for brand new records that have been exposed to excess heat during shipment, to you or your favorite record shop, to be physically warped by the time the cardboard packaging is cut open.

If the records were stacked on top of one another or otherwise improperly stored for weeks or months at a time, they’re likely going to be imperfect.

Minor warping shouldn’t cause any audible differences. If your record is so warped that it doesn’t even lay flat, then of course, your record player is going to pick up on that and you’ll hear it.

If the record player warping issue continues even with older records, then you can’t blame your vinyl record collection alone. There’s something amiss with your record player.

I would suggest checking where you keep your turntable.

I recently wrote about where you should and shouldn’t put record players. If you read that post, then you’ll recall that they shouldn’t go on any item that produces vibrations such as a subwoofer.

It could be that it’s the vibrations that are causing your record player to sound warped and distorted even when everything with the record player is otherwise fine.

Once you move the record player to a more vibration-free zone, the warping issue should be done.

You can’t quite put your finger on what’s wrong with your turntable, but every time you listen to music on it, it sounds weird. That’s really the best descriptor you can give.

You know what clear, pristine music is supposed to sound like, and this isn’t it.

Since yours sounds like a general problem, the best place to start is with a general solution. Check your stylus.

If you’ve used your record player even a couple of times, the stylus could have accumulated dust, dirt, and even hair.

This gunk is coated on the edge of the needle, preventing the stylus from making clean contact with your vinyl record.

That could be why your record sounds weird.

Much more pressing is that the gunk on the stylus can scratch the record and possibly damage it, so you need to rectify this issue.

I’ve written about cleaning your record player stylus before, but here’s a quick recap.

You’ll have to buy a specialty stylus brush or a stylus cleaner.

If you’re using the brush, then gently clean the stylus first on the back and then on the front.

If you have a stylus cleaning product, it will include a gel pad. Put the gel pad underneath your stylus and carefully lift it until it touches the stylus. The gel will pull any dust, debri, or dirt off the stylus.

What if your stylus is clean and yet the problem persists?

Then I would encourage you to check the record itself for visible dust and debri.

Vinyl records, especially when you leave them out in the open for too long, can easily accumulate a fine layer of dust and dirt.

You can’t always see it but trust me when I say you can hear it, as your record will just sound strange when you play it.

There’s more than that, though. Just as a dirty needle can scratch your vinyl records, a dirty record can also end up damaged.

How? The stylus pushes the dirt into the grooves of the record.

Cleaning a vinyl record is easy. Using a microfiber cloth, wipe both sides of the record to collect any loose dirt and other particles. Go gentle so you don’t grind the dirt deeper into the vinyl.

Next, moisten the cloth with distilled water and wipe down the vinyl. You should squeeze out the cloth so it isn’t sopping with water.

As you wipe, do so rotationally, following the grooves of the record.

You may wish to use a specialty record cleaner as well, which you can dip the microfiber cloth into and then wipe over the vinyl record.

Be sure to gently rinse the record with water–not under a tap, of course–but with a clean, wet microfiber cloth.

Then take a clean microfiber cloth and gently dab at the record on both sides until it’s dry.

Listening to records on your turntable lately is like tuning into a radio station when you’re out of range. It’s all static.

You’re not sure why, but it’s certainly disrupting how you enjoy your music.

Let’s talk about what’s happening. More than likely, if you’re hearing static, it’s going to be from a turntable more than a record player.

The reason? Turntables need a lot of external components such as a power amp and a receiver whereas a record player has all that built in.

If any of the turntable’s components have a bad connection or are broken, then that explains why you hear static.

Once you determine which part of your turntable setup has gone bad and either repair or replace that component, you shouldn’t hear static whenever you try to spin your favorite tunes.

Now, record players aren’t completely invincible to static. After all, your vinyl records themselves can carry static on them, and that affects the listening experience whether on a turntable or a record player.

Why Your Record Player Sounds Muffled: Low Volume or Cartridge Out of Alignment

Whenever you play a record on your turntable, it sounds like you’re listening to it from the other room with the door closed even though you’re standing right beside your turntable.

The sound is so muffled that you can barely hear anything.

Well, sometimes the most obvious solution is the correct one, so I’ll ask you to check the volume of your turntable or record player. It very well could be that the volume is set too low!

Once you raise the volume a little to your preferred level, the music should come through loud, clear, and crisp.

Perhaps your volume setting is fine, but your record audio still sounds like it’s playing from underground.

It could be a cartridge alignment issue.

One of the simplest ways to diagnose if the cartridge is misaligned is to print an alignment protractor.

The protractor will have two points, including a dot where the turntable stylus is supposed to go.

The rest of the protractor includes gridlines that are parallel to both the side and the front of the cart.

Once you’ve diagnosed a misalignment, you can adjust your cartridge by loosening its mounting hardware so the cart can move more freely in the headshell. Do not completely detach the cart.

Realign the cartridge to the printed protractor and then tighten up the mounting hardware. Try out your turntable and the records should be anything but muffled!